For the generations growing up after the Second World Was it is hard to imagine life without jeans. Available in all sizes, perceived as a garment for leisure time or a trendy item that enhances the legs, hips, (or BUTT) of whomever is wearing them, over time is has developed an ever changing product range to satisfy a constant demand. Nevertheless, for nearly 400 years denim existed only in the form of large pieces of canvas, which ended up being roughly cut and sewn mainly for agricultural use. It was not until the middle of the 19th century when a German who had emigrated to the the United States of America inaugurated the era of jeans as a man’s garment and understood the significance of a phenomenon that lies at the foundation of contemporary civilization.

The very first factory specializing in the production of denim garments was “LeviStrauss”, after the Bavarian name of its founder, Levi Strauss. Legend has it that the young German of Jewish origin Lob Strauss, soon transformed into the english-speaking Levi Strauss, emigrated to the United States in 1847 and immediately after his arrival in New York started selling denim tents and pieces of material from town to town to earn enough to live on.  His street vending activities eventually led him to San Francisco in 1853, an irresistible magnet in those days due to the Gold Rush and the booming market created by the migratory flow of gold seekers. These “workers” needed durable clothing which would not wear out as fast as the normal trousers of the day. Levi thought he has the right answer, took his tent material and has a local tailor make a pair of trousers. Legend has it that the first gold miner who put them on was so satisfied that he because an extraordinary advertising vehicle for the garment. This precursor to jeans, practical to wear one’s normal clothing, also to protect it, was called overalls. The story tells how Levi Strauss gradually left his work as a traveling salesman and rationalized the production of overalls, in the form of trousers. Soon they were being mass produced, with workers sewing mainly larger sizes which fit everyone, since they covered everything anyway. 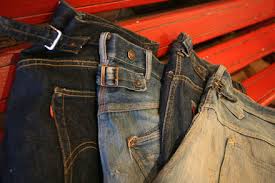 Here it is 2010, Levi Strauss is still based in San Fransisco, CA employing over 12,000 denim addicts and slingin’ jeans in over 60 countries. Levi Strauss’s denim emporium is still thriving globally; thanks to his denim dreams. He launched a competitive new industry in the apparel and retail world that has revolutionized the street landscape from rural to the bustling cities across the globe.

Everyone must have at least one pair chilling in their closets…I want to see them- snap a PHOTO and POST!

powered by WordPress and The Clear Line Theme